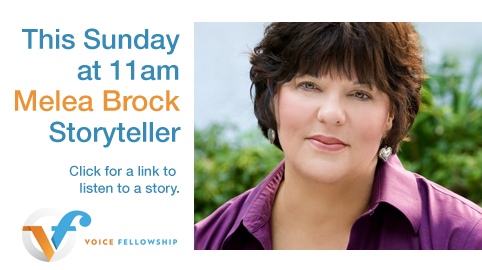 Listen to a story>>

About Melea Brock and RightSideUpStories

Melea Brock will say (with a wink!) that she tells stories for the “kid” inside everyone. Melea’s training in social work and student affairs (Azusa Pacific University), coupled with a background in theater, have provided her with a special kind of insight into the human condition and an ability to communicate through oral storytelling. Melea’s stories, whether hers or an ancient folktale or true life-story, are brought to life with believable characterization and the well-trained narrative skills of a seasoned artist.

Melea’s proving ground for her story skills began in a college setting when she began writing stories to communicate difficult truths to the college students with whom she worked during the early 1980’s. It wasn’t long before her storytelling was taking her into churches, organizations, conferences, board rooms, backyards, and the sides of beds across the United States and into Canada. Her work has been produced into audio and book form and has been featured in numerous magazines. The release of her newest book and audio CD entitled, “Step Inside… Where Stories Come to Life,” has received favorable reviews from adults, children alike, and what Melea calls the professional storytellers—hospice caregivers, mommies and daddies, grandparents, teachers, pastors, and counselors. “Their use of my stories is the reason I keep writing them!”

A recent joy in 2011 has been the development of her own live radio show called, “Story Matters”. Melea’s Christmas radio special, “Christmas Wrapped In Story,” had another successful year of airing across the U.S., Canada, and Pacific Islands.

Melea lives in beautiful Southern CA with her husband and two children.