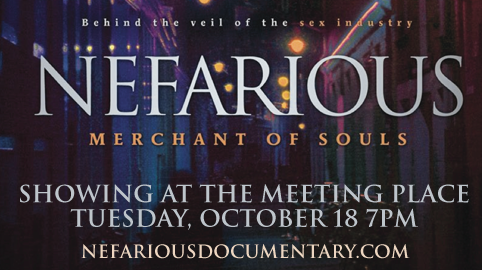 “Modern slavery.” It sounds like a paradox. Hasn’t humanity progressed? Didn’t we leave slavery dead on the battlefields of the American Civil war? Didn’t social reformers like Lincoln and Wilberforce legislate against such cruelty over a hun- dred years ago? So we had thought. But, with over 27 million enslaved people across the world, human trafficking is still the battlefront of the century.

Regardless of nationality, victims are systematically stripped of their identity, battered into gruesome submission and made to perform humiliating sexual acts on up to 40 strangers every night. Most are held in makeshift jail cells, forced to take heavy doses of illegal drugs and monitored very closely. On average, victims are thrown into such ghastly oppression at age 13. Some are abducted outright, while others are lured out of poverty, romantically seduced, or sold by their families.

Nefarious: Merchant of Souls, is a hard-hitting documentary that exposes the disturbing trends in modern sex slavery. From the very first scene, Nefari- ous ushers you into the nightmare of sex slavery that hundreds of thousands experience daily. You’ll see where slaves are sold (often in developed, affluent countries), where they work and are confined. You’ll hear first-hand interviews with real victims and traffickers, along with expert analysis from international humanitarian leaders.

From initial recruitment to victim liberation––and everything between––the previously veiled underworld of sex slavery is uncovered in the groundbreaking, tell-all Nefarious: Merchant of Souls.

Nefarious will be shown on Tuesday, October 18th at The Meeting Place at the Grand Horizon Center at 7pm. There is no charge for this event and a love offering will be taken to cover costs.

This movie is about exposing the reality of human sex trafficking.  We advise that all parents visit the website and watch the trailer to be well informed about content before bringing children into the viewing.

← The Journey
Can You Trust? →