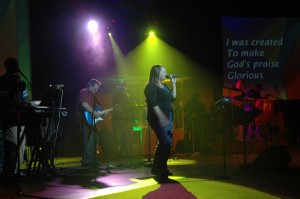 A Special Note from Bob Deering:
This is Bob, and I wanted to give you a quick update on the awesome night we had last night at the Meeting Place. But before I do so, I have to compliment the team that participated in every area. What a spectacular job they all did in serving Jesus last night! I personally know that time, truth and fruit doesn’t lie, and if last night is an indication of the Tuesday nights to come, we are hugely excited!

I want to give to you a few statistics and to encourage all of you to invite someone next Tuesday night, as well as keeping us in prayer for the advancing of God’s kingdom. Last night, we had 328 people in attendance with 25 different churches represented. There were 25 people that went through the prophetic rooms, with the majority of those being first-timers to ever receive a prophetic word.  There were three confirmed healings in the Healing Rooms. Four people came to know Jesus Christ as their Lord and Savior for the very first time and two recommitted their lives to Him. 35 bags of groceries were distributed through the Joseph Storehouse to those in need.

As a ministry, we will continually pray for all the churches in this region as we believe that this is just the beginning of all that God wants to do in Michiana. Thanks for your prayers and we hope that you can attend next Tuesday and bring a friend.

← The Meeting Place
One Year →